The Top 8 African Destinations For The Best Wildlife Photography

Put a wildlife lover (with a good eye) in Africa, with a camera, and it’s safe to say art will be made. With the diversity of fauna and flora on the continent, you’re bound to leave with a handful of shots you can be proud of and memories to last a lifetime. Many of our photographers from Africa’s Photographer of the Year have brought back exquisite photos from their trips. Take a look at this list of our favourite wildlife photography destinations – places you’ll no doubt fall in love with: 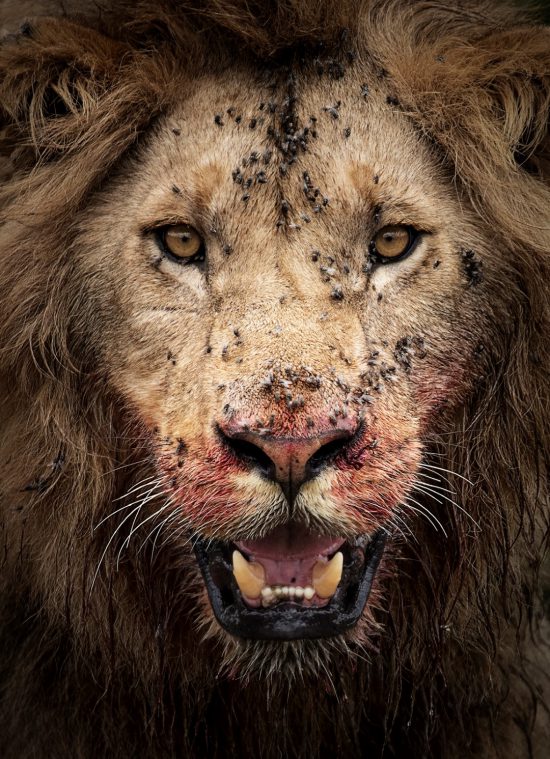 Clement Kiragu: The blood of King Notch runs in his veins

This takes our number one spot to take snaps of wildlife due to remarkable populations of predators and, of course,  the Great Migration. Every year, somewhere between the months of July and October, The Great Wildebeest Migration move into the area. Thousands of zebra, wildebeest, and gazelle make their annual pilgrimage from the Serengeti, following the green grasses that pop up after the rains have fallen over the Maasai Mara. This event allows for unbelievable photographic opportunities thanks to the large herds of wildebeest and the reserve’s resident big cats and crocodiles. If you’re really lucky, you may even snap scenes of a Mara River crossing. 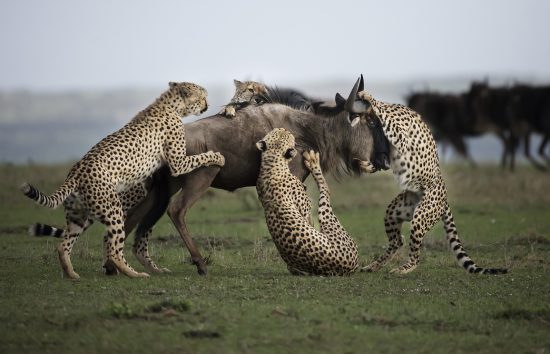 Clement Kiragu: I’ve never seen a 5 cheetah coalition surviving in the wild. There is this powerful coalition that is taking Maasai Mara by storm. They have a very unique hunting strategy 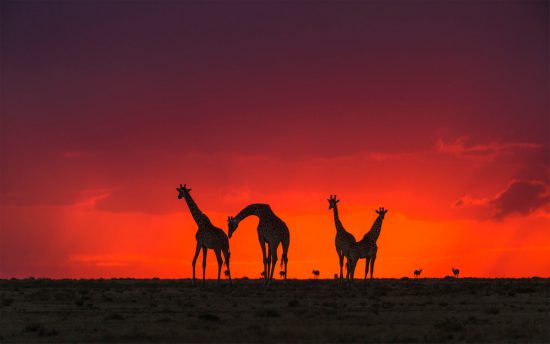 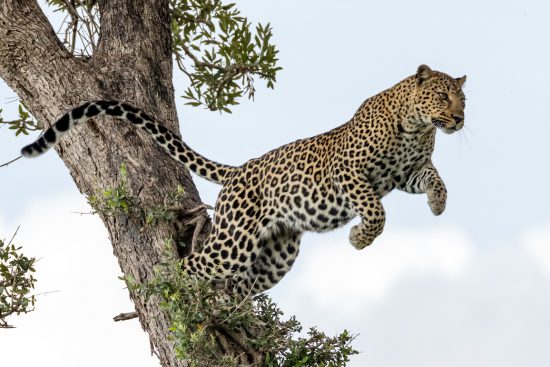 Carsten Riedl: Leopard jumps from one tree to another

Best time to snap: December to January / April to October 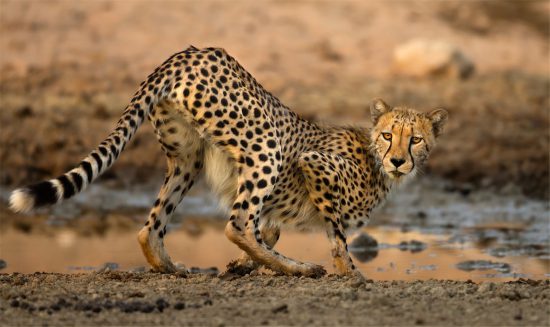 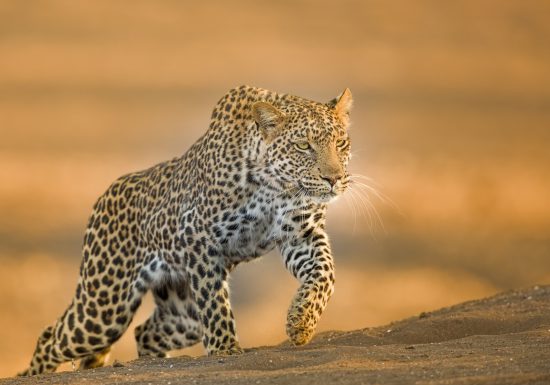 Stefano Romei: Take a walk on the wildside

Photographers are bound to leave Etosha with a memory card full of incredible images. One of Southern Africa’s  most beloved and easily accessible wildlife sanctuaries, Etosha is home to over 114 mammal species and 340 bird species. Its name translates to “great white place” referencing its mirage-inducing pan, which was, millions of years ago, an ancient sea. Enjoy snapping the varied vegetation with sightings of zebra, wildebeest, rhino, antelope and elephant. The dry season makes photography somewhat easier, with water sources becoming crowded with competing wildlife. Embark on bush walks with a camera in hand and in the evenings capture sightings at floodlit waterholes. 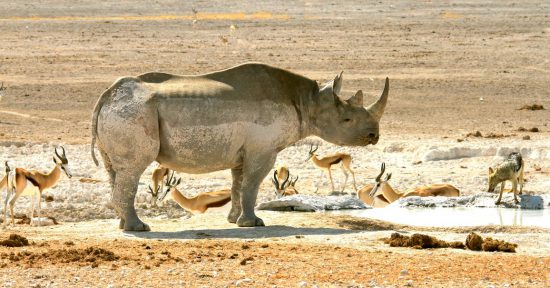 Mike Walsh: Black rhino together with springbok and black-backed jackal 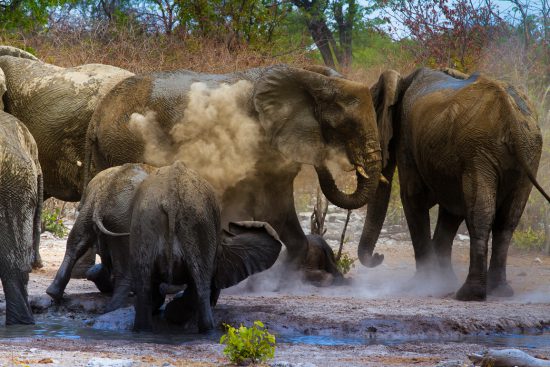 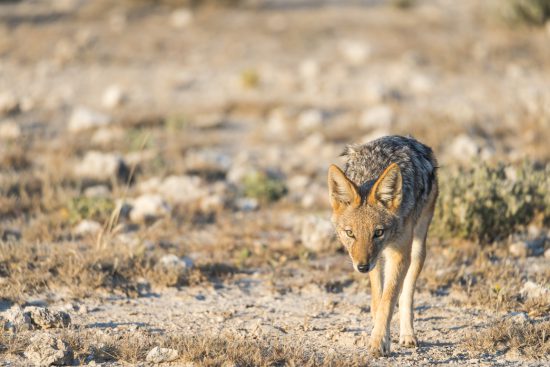 Some of the most iconic wildlife photography has been taken within Africa’s second-largest park, the Kruger National Park. Home to the highest population of the Big 5 (elephant, lion, rhino, leopard and buffalo) in South Africa and a number of exquisite rivers such as the Limpopo, Sabie and Olifants. This destination is perfect for wildlife lovers and is filled with history and breathtaking sunsets 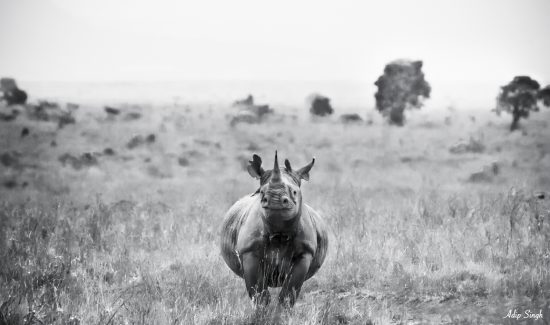 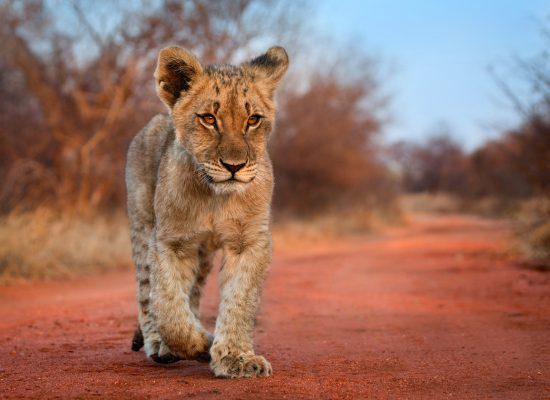 Dieter-Mendzigall-Germany Young: Lion accompanies us on a morning walk in South Africa 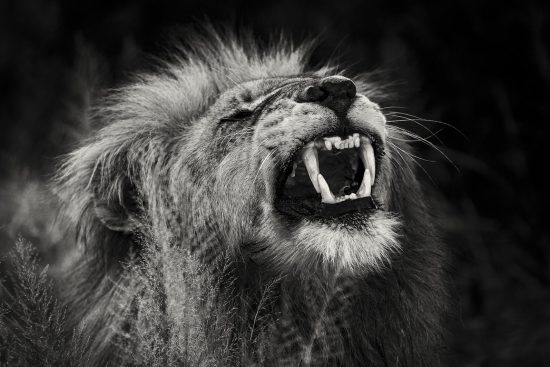 For the perfect rainforest shot and for capturing tropical hues, eastern Madagascar is your spot. With six national parks to choose from and each with a unique biodiversity, Madagascar is a photographer’s paradise. Andasibe-Mantadia National Park is one of the most popular parks with dense and damp forests home to an incredible diversity of lemur species- with 11 found here in total. Stroll through the forests and capture these exquisite creatures in action. This park is renowned for being home to the Indri, a species of lemur which stands a metre high and resembles a panda bear. Doesn’t that sound like the perfect subject for your next shoot?

Best time to snap: April to May 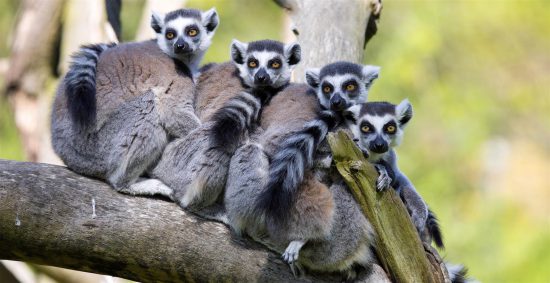 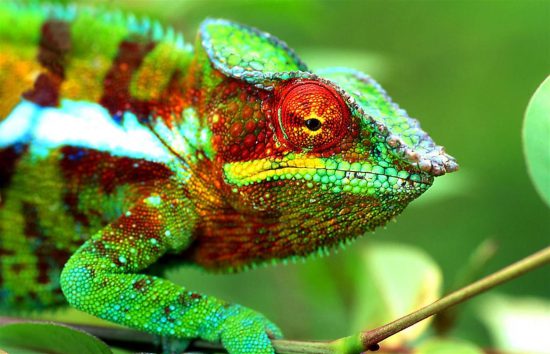 There is nothing like coming face-to-face with, and snapping shots of, one of our closest relatives, in their natural habitat. Volcanoes National Park is a rainforest and bamboo haven for around 400 mountain gorillas and is home to five volcanoes of the Virunga Mountains. The rare golden monkey, black-fronted duiker, three-horned chameleon, spotted hyena, elephants and over 180 species of birds also make up the national park. Capture this exquisite creatures against the lush forest as your backdrop. This park is also celebrated as the setting for the book and film Gorillas in the Mist. 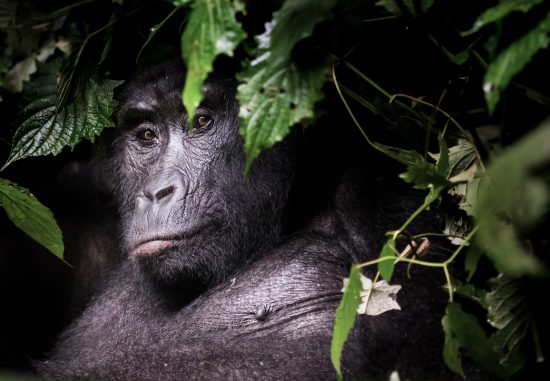 Harry Skeggs: A mountain gorilla weighs me up curiously from the depths of the bwindi jungle 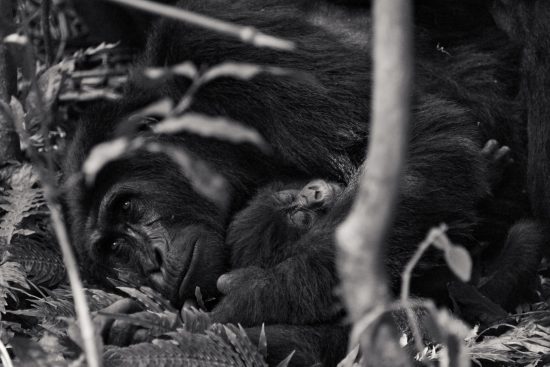 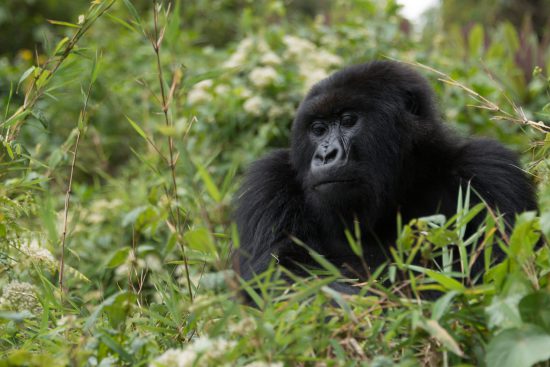 Nick Dale: A gorilla looks down from the top of a bush. Only its head and chest can be seen in the dense green undergrowth of the forest.

The Serengeti translates to ‘endless plains’, which is fitting when marveling at 1.5 million hectares of plains. This park is known for its variety of wildlife, Big 5 and the annual Great Migration. The Great Migration sees 1.5 million wildebeest, moving to better grazing. This is the perfect opportunity to capture wildebeest making a river crossing or predators lingering nearby. This park has superb game-viewing all year round, a huge predator population and many migratory birds, the perfect setting for a photographic safari. 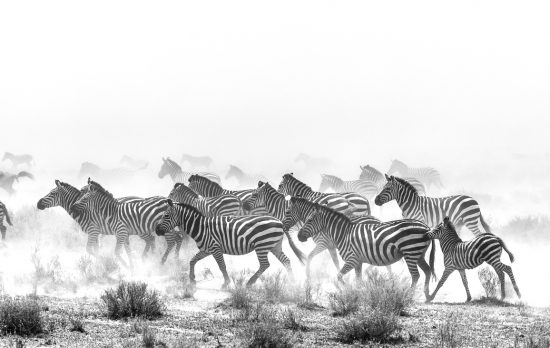 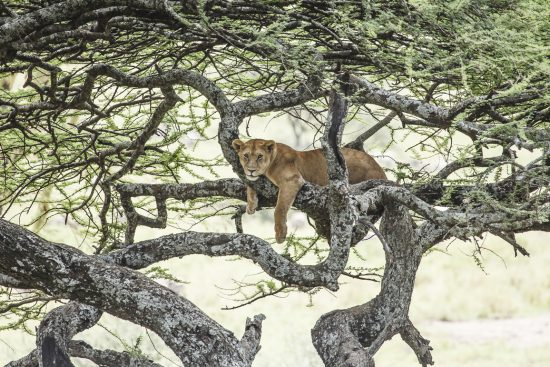 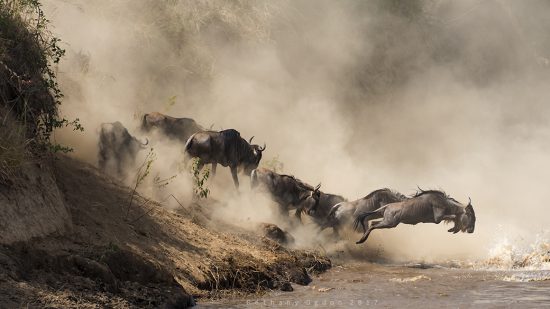 Bethany Ogdon: Leaping into the Mara

The Okavango Delta is perfect for nature lovers and leaves travelers with spectacular shots. Take a trip on a Mokoro on the world’s largest inland river delta and enjoy the blissful isolation while you snap away. Wildlife encounters here are usually up-close-and-personal and include elephant, hippo, crocodile, buffalo, giraffe, wild dog, cheetah and hyena.

Best time to snap: May to September 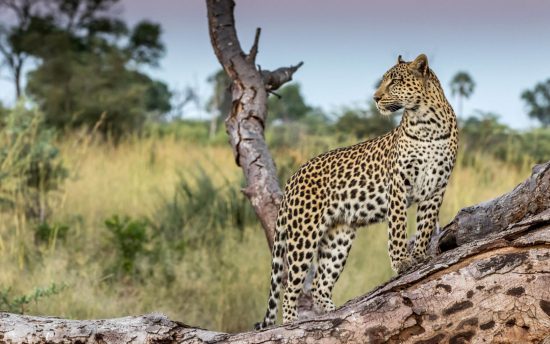 Chase Wells: Leopardess on the lookout 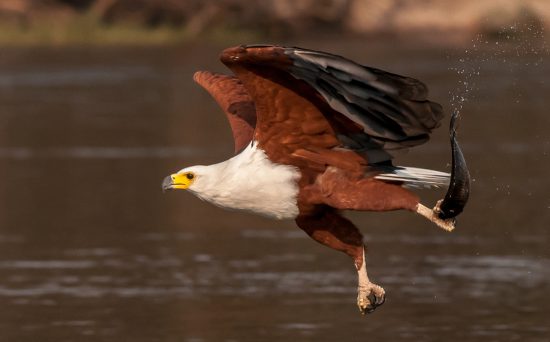 And, when you’ve finished with those incredible shots, show them off to us in Africa’s Photographer of the Year.

Jemma's love for nature and culture grew while growing up on her family's dairy farm in the Natal Midlands. Since then she has been a ski lift operator in the Sierra Nevada, an Au Pair in London, an English teacher in Vietnam and is now writing about her favourite continent - Africa.

You may also enjoy

Best of Africa Off the Beaten Track